Ostfildern-Kemnat, Germany. Plants used to generate renewable energies – especially wind and hydroelectric power – are often located hundreds of miles away from where the power is actually needed. This changes the requirements on the power grid as large amounts of energy have to be transported over long distances. To this end, what’s known as high-voltage direct-current transmission (HVDC) is currently being expanded – a step that will also help reduce greenhouse gas emissions from the power generating industry and enable international climate protection agreements to be met. Power transmission using HVDC technology requires that the energy generated must be transformed. And this is where power capacitors and insulators prove to be key components. Their service life and efficiency can be improved by using customised, vegetable oil-based potting compounds developed by WEVO-CHEMIE GmbH. These compounds make it possible to replace environmentally harmful gases and insulating oils that have predominantly been used until now. At the same time, they ensure, among other things, electrical insulation, freedom from partial discharges as well as attenuation and protection of components against moisture ingress. Whether from offshore wind farms in the North Sea to southern Germany or from wind farms in Wyoming, USA, to the conurbations of California, Nevada and Arizona – HVDC technology is used to transport energy from renewable sources over long distances, as direct current (DC) at high voltages of 200 to 500 kV. This makes transmission more efficient and less energy is lost than with standard alternating current (AC)-based power grids, whose capacity is moreover not capable of handling such large amounts of energy.

Power capacitors and insulators are among the key components that facilitate the current-transformation process essential for HVDC. In the converter station at the beginning of the HVDC transmission line, capacitor banks consisting of many capacitors connected in parallel or in series are used to stabilise the voltage. This is because transformation of the alternating current, generated from the respective renewable energy source, to direct current for long-distance transport can result in enormous fluctuations, which could cause instabilities in the grid.

Once it reaches the transformer substation in the destination region, the direct current is converted back to alternating current so that the energy can be fed back into the regular power grid. At this end of the HVDC link, capacitor banks ensure that the AC secondary voltage is stable and ready to be fed into the power grid. Bushing insulators are also used in converter stations and substations to insulate live conductors in power transformers and capacitors.

Power capacitors consist of several elements of cylindrically or flat-wound, metallised plastic films, which are soldered together. Until now, these elements have for the most part been insulated by means of insulating oils and gases, including sulphur hexafluoride (SF6), the most potent greenhouse gas known to mankind: one kilogramme of this gas is as harmful as 26,087 kilogrammes of carbon dioxide (CO2). Customised polyurethane resins from Wevo, which are based on renewable raw materials, make it possible to replace the above-mentioned insulating materials, and they also offer a number of additional advantages.

On the one hand, potting the capacitors makes them leakage-free, as polyurethane resins cure to polymers which vary between gel-like and elastic, depending on their composition and mixing ratio. In contrast to conventional construction methods using liquid or gaseous insulating materials, this manufacturing method produces so-called dry-type capacitors.

The potting compound fills the cavities between the individual elements without voids, so that the capacitor is insulated and protected from partial discharges. Thanks to their low mixed viscosity, the Wevo materials can also be potted under vacuum, which again significantly improves partial discharge resistance. In addition, this ensures good damping of vibrations and mechanical shocks resulting from electrical breakdowns or lightning strikes. Moreover, vibrations during operation and the resulting noise are reduced.

RENEWABLE RAW MATERIALS AS THE BASIS FOR OUR MATERIALS

The composition of Wevo’s customisable potting compounds based on renewable vegetable oils and other raw materials makes them hydrophobic. As a result, they offer lasting protection of the capacitors against moisture ingress. What’s more, the products have good dielectric properties, such as a low loss factor and low permittivity, and are self-healing due to their gel-like to soft and elastic properties. This self-healing feature allows the potted capacitors to remain fully operational even after a power failure and resulting arcing.

Furthermore, Wevo potting compounds provide significantly better heat dissipation than insulating oils and SF6 gas, and special fillers can further improve thermal conductivity. The fire integrity of the capacitors is also significantly increased by the dry design of the dry-type capacitors. If required, self-extinguishing properties of the potting compounds in accordance with UL 94 V can be adapted. And when it comes to disposal, the cured product can ultimately be treated as normal rather than hazardous waste.

Cavities can also occur in the above-mentioned bushing insulators due to their design, which is why they must be insulated and protected against creepage, partial discharges and mechanical shocks. The Wevo polybutadiene-based or vegetable oil-based polyurethane potting compounds used for this purpose can be foamed stably in the mixing and metering system by adding inert gases such as nitrogen or helium. This makes it possible to pot the insulators, some of which are several metres long, while adding a comparatively minimal amount of weight. The foamed structure also provides good vibration and sound insulation. Custom silicone gels and soft and elastic silicone potting compounds from Wevo can also be used for this purpose. 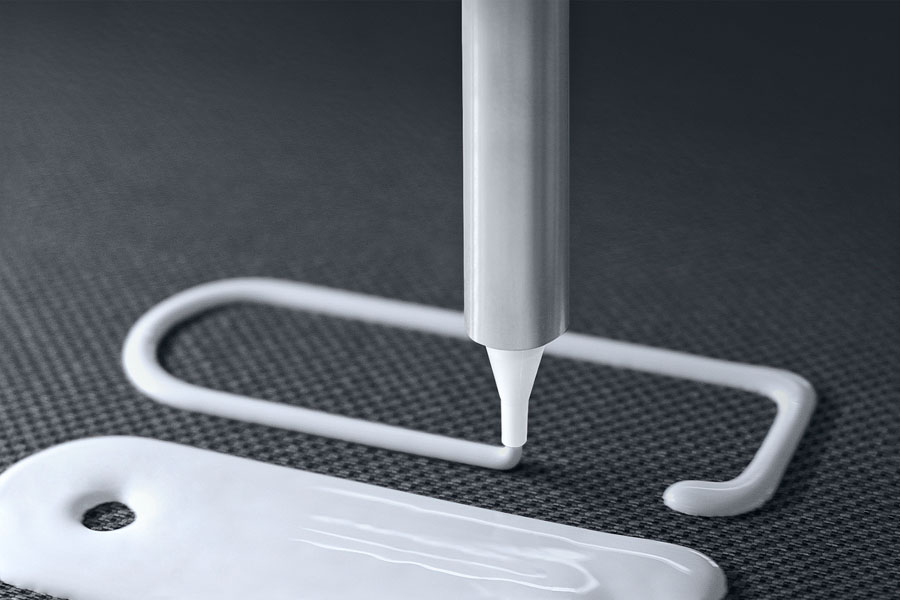 Reactive resins from Wevo offer both improved handling and optimised final properties for additive manufacturing in the textile sector.